Rick Mitchell has been teaching since 1993 and has been at Kearney High School since 2000 as an Instrumental Music Instructor, Music Department Chair and Tri M Sponsor. He also taught at Schuyler Central High School, Elm Creek Schools, served as adjunct brass faculty at the University of Nebraska – Kearney, and established Kearney’s first Kindermusik studio.  Rick is a trumpet player that performs in both the classical and jazz styles and has performed with groups including the Columbus Jazz Orchestra, Dobytown Brass Quintet, Flatwater Jazz Orchestra and the Kearney Symphony Orchestra.  He is also active as a clinician and adjudicator throughout Nebraska and was selected for the 2019 50 Directors that Make a Difference award sponsored by School Band and Orchestra magazine. Rick holds a B.M.E from the University of Nebraska-Lincoln and an MA in Music Education from the University of Nebraska-Kearney.  He lives in Kearney with his wife and two children and has an adult son that is a professional saxophone player. 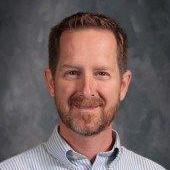