My name is Nate Polacek and I'm proud to be a Bearcat alum, teacher, and coach.  I am strongly supported by my wife Amanda (another 2008 KHS grad) and we live in Kearney with our daughter Kennedy and twins Drake and Eliza.
I graduated from Kearney High School in 2008 and attended the University of Nebraska at Lincoln where I competed on the track and field team.  After earning my Bachelor's Degree in English education, I completed my Master's Degree at the University of Nebraska at Kearney in Curriculum and Instruction with an emphasis in English.
I teach English III, my favorite course--American literature.

The basic survey includes the study of American authors and their writings from colonial to contemporary times. Both the chronological and thematic approach to literature is used. Emphasis is placed on the historical background and the resulting literature of the period, the change and flexibility of the English language, and the development of both oral and written composition. Completion of a persuasive research paper is expected. 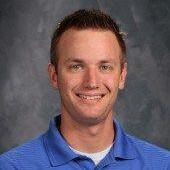